The client for this project is a mature family with 3 children. Two older sons are living separately, while younger daughter is a student and lives with the parents.The family pursues an active lifestyle. 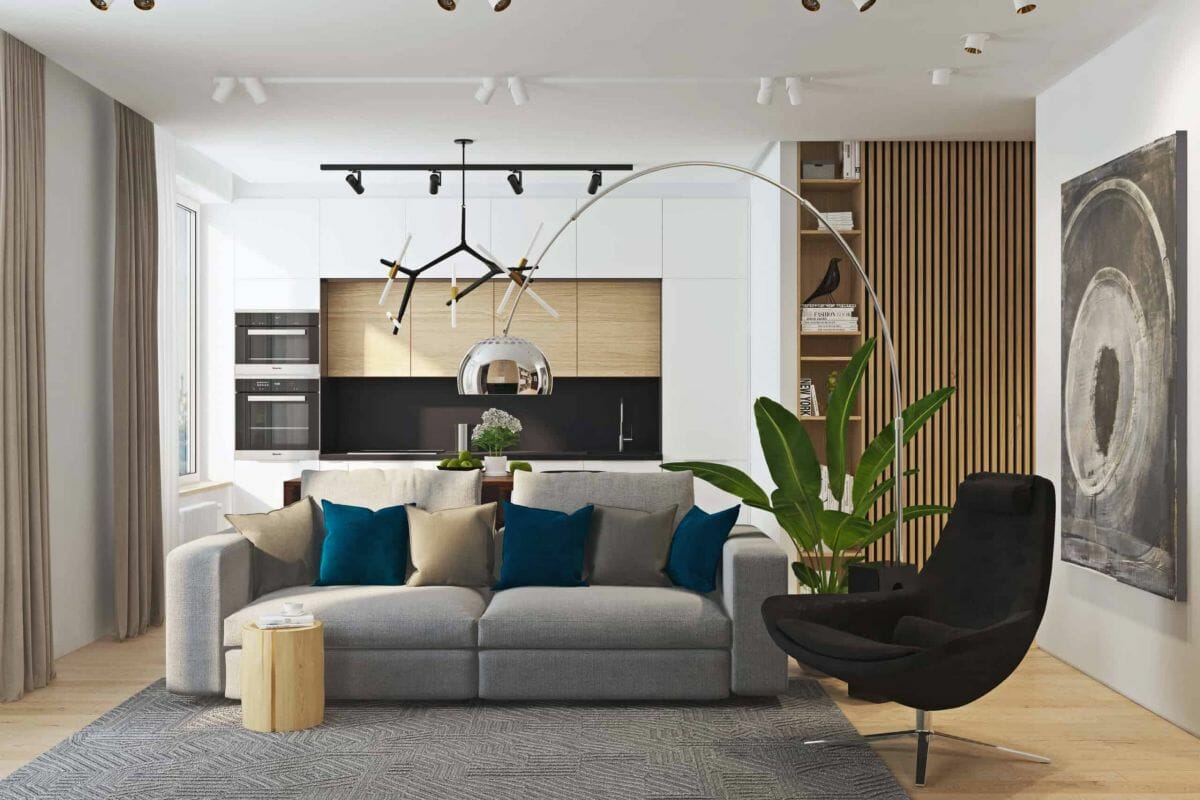 A big dining table was the main request of the family, because their sons often come to their place for a dinner.
The second request was a big dressing-room, for which clients were ready to give up on guest bathroom. 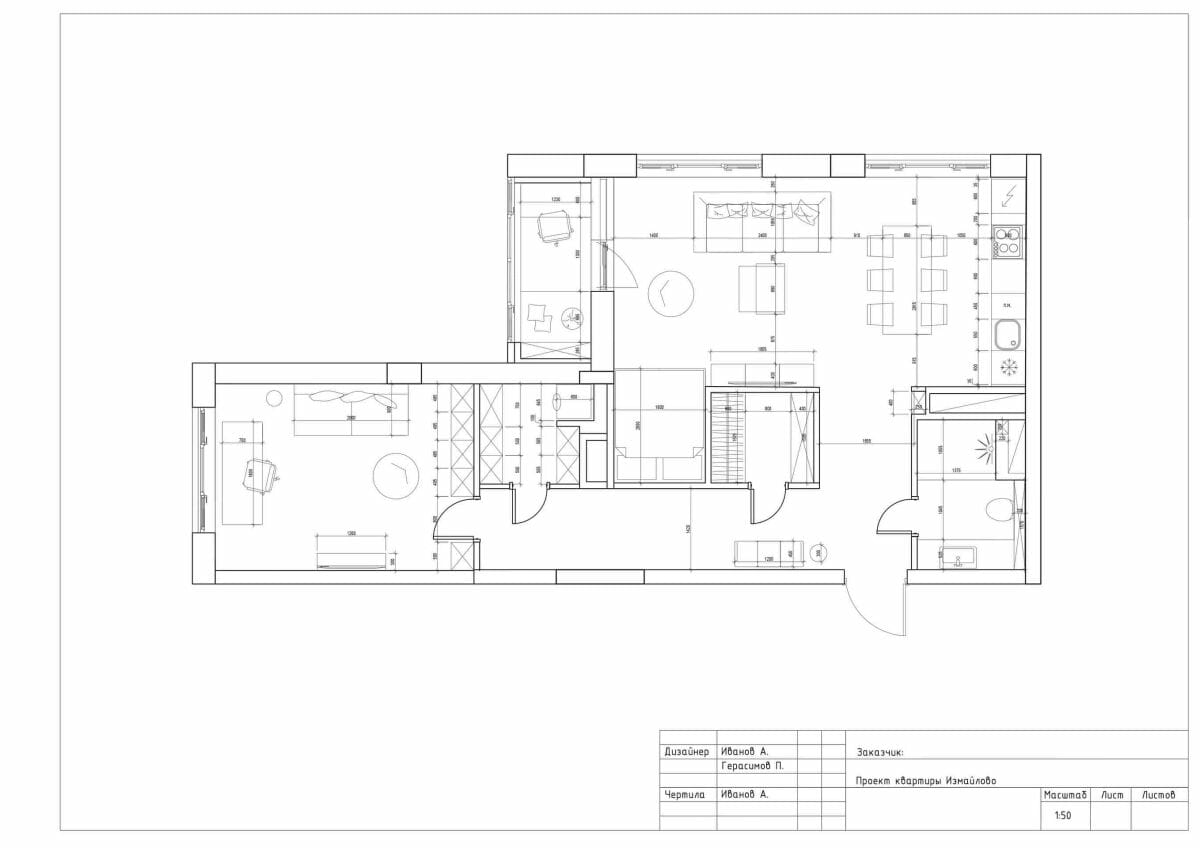 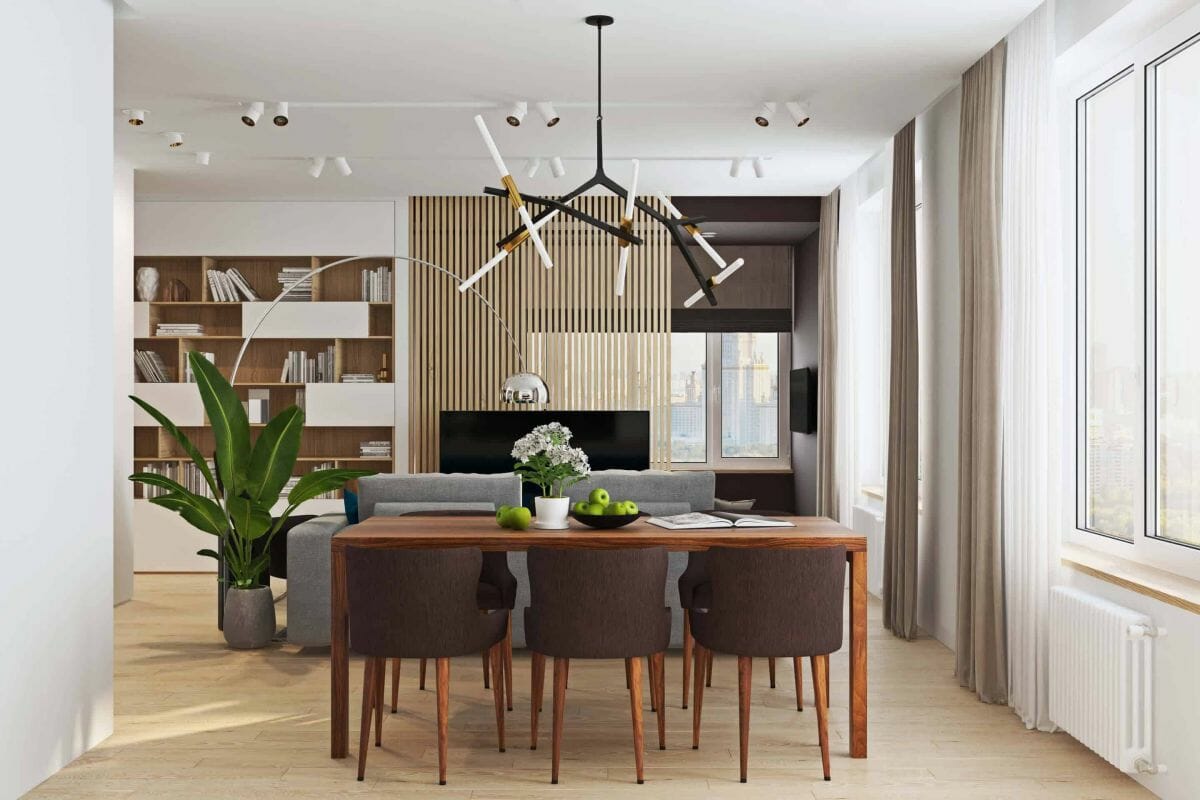 In finishing we didn’t extended away from our favorite materials. We used painting for walls, parquet plank and ceramic granite for the floor. For color scheme being more specific, we partly used wooden lathes 2×3 sm on the walls, which became the part of interior design. In actual fact these lathes substituted wooden panels, being more budget variant with the same effect.
Storage systems

In this project we used general lightening in the form of built-in lightening fixtures Сentrsvet. Also, for general lightening we used surface-mounted luminaire in the living room niche and track ones for the kitchen. The light from them is directed and soft at the same time. Despite the lightening is directed, it lightens zones and provides general light for each zone.
We also used mood lighting of led tape in the flat. The tape could be regulated by color and brightness with the help of desk and mobile application. So you can easily create the atmosphere you need.

Functional lightening is provided by floor-lamp and desk lamps. In the bathroom mirror lightening is accomplished with the help of the special built-in lamp. The light doesn’t attract attention and fulfills its function; these are the rules of contemporary design.
Over the dining table there is ceiling lamp with latten elements. With the help of this we emphasized statusness and expensiveness of the interior.

We used neutral complex tones of brown and grey. There is an active grey wall in the living room. Children’s room looks a little bit hipsterish because of usage of white brick in combination with bright accents of blue and yellow colors. This room is the only one, where we used bright colors.

We used Russian manufacturers of the soft furniture (e.i. sofa of 8 Marta), and also designer brands replicas.
There is minimal amount of detached furniture: armchair and sofa in the living room, desk in the children’s room. Mainly all furniture is built-in.

We followed fashionable trend and added latten elements. In general all furniture and lightening are décor that form interior climate. In neutral monochrome interior game is set by green plants.

The wall in the kitchens zone is too odd. We needed to level it, for not having problems when placing cabinetry. It won’t be easy technically to place wooden lathes. We will need to place inserts on the floor and at the ceiling for lathes’ stableness. This question we will resolve together with supplier.

Built-in baseboard and jib doors are also a difficult pill to swallow. This is out-of-box solution, that requires detailed working out of nod points of the walls. 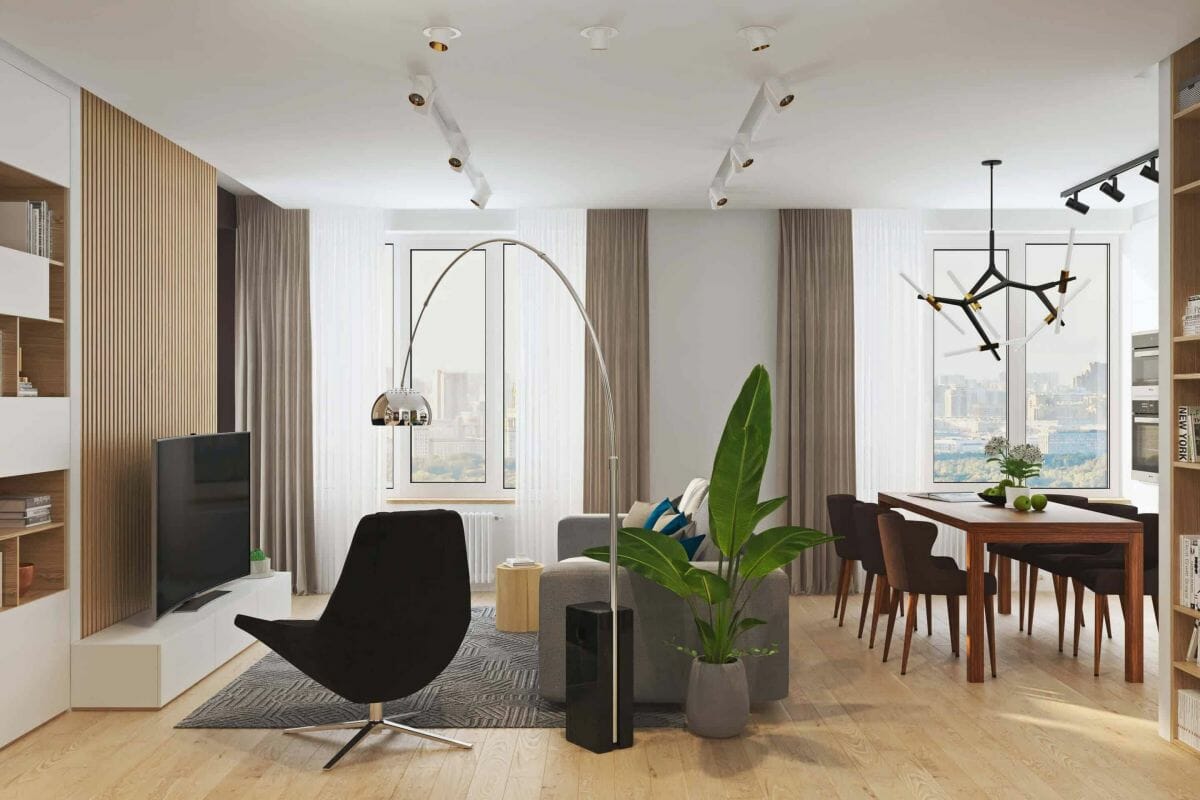 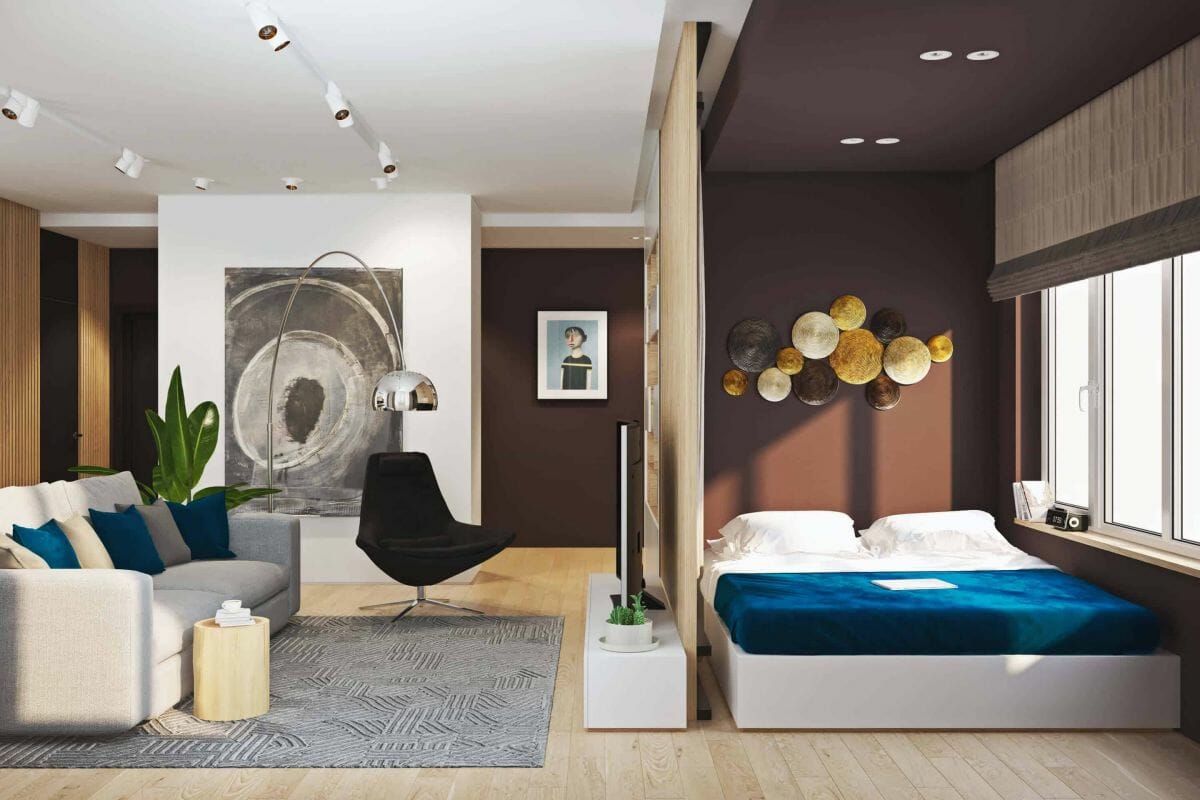 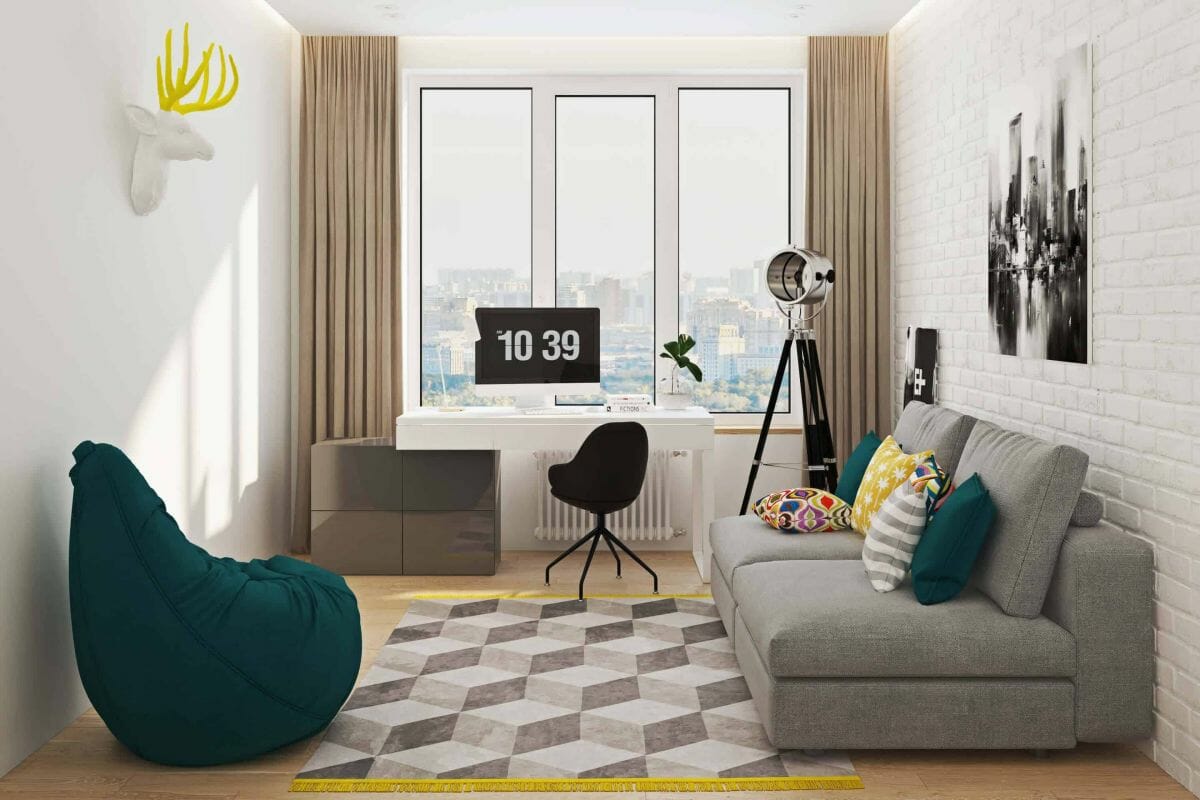 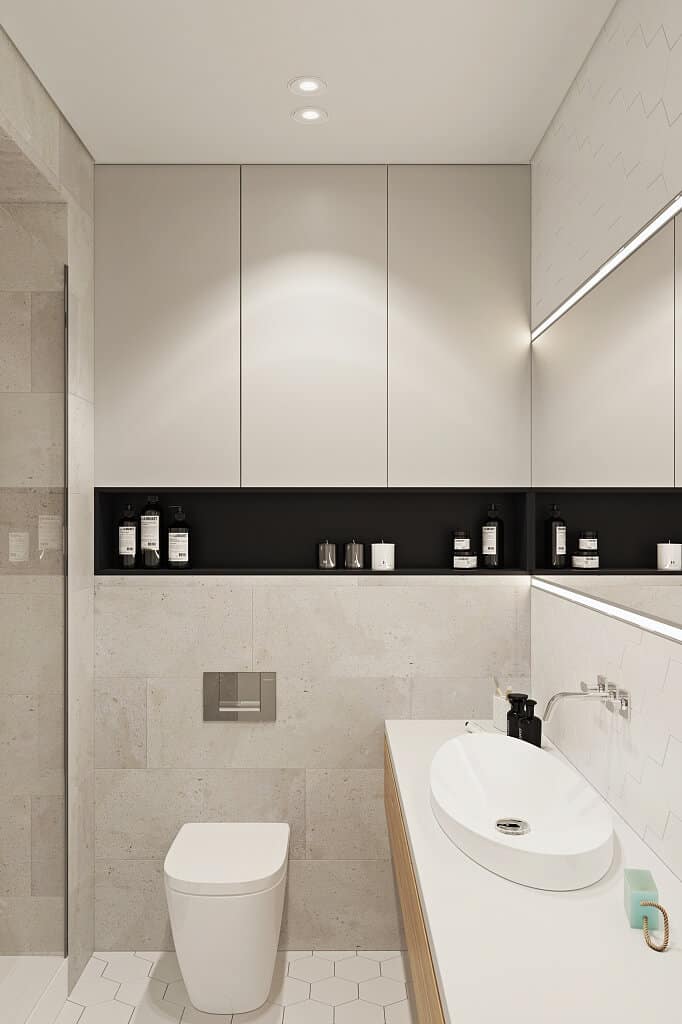 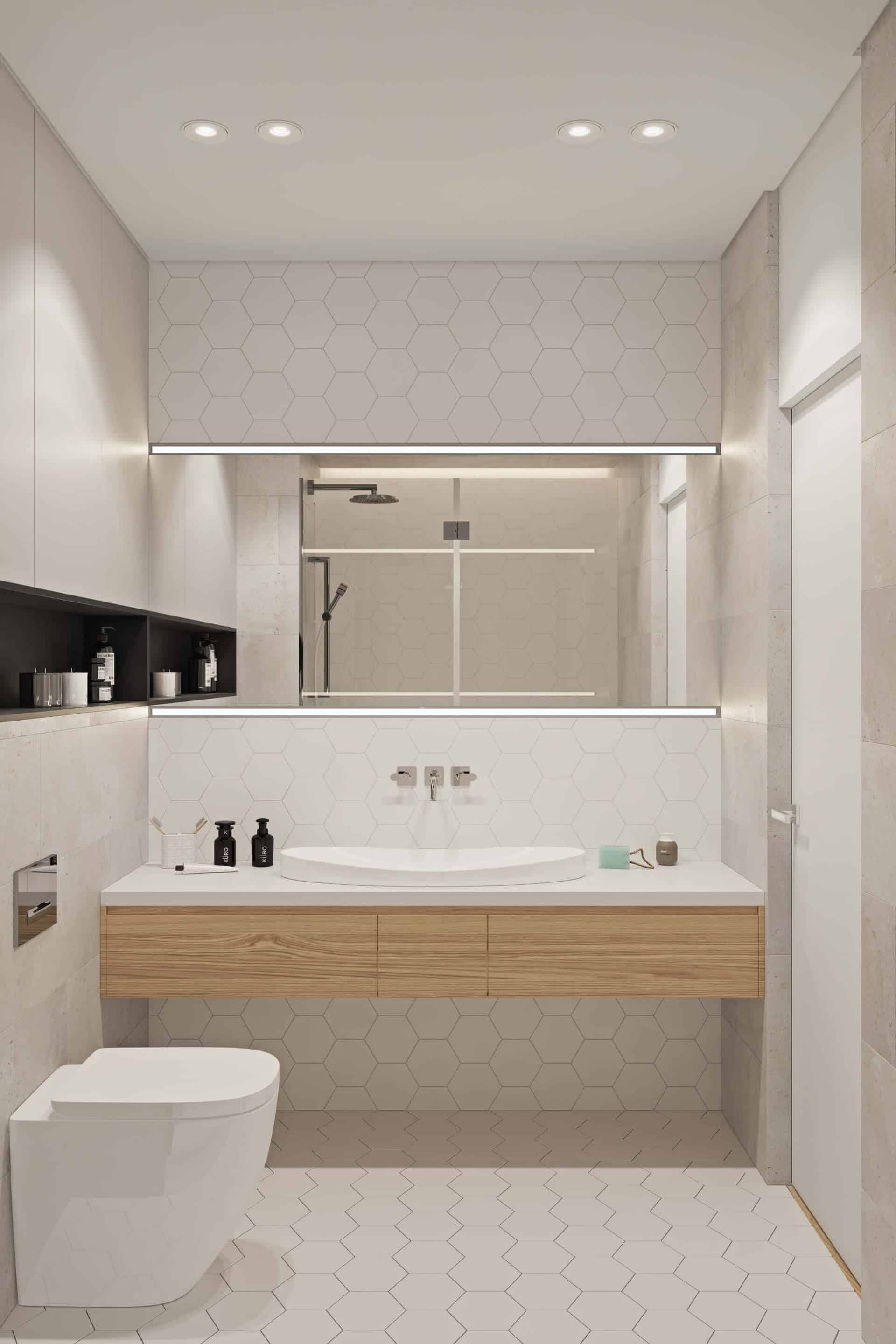