“South Beach Stigma” is the first painting featured and is Acrylic on canvas at 15”x32.” This painting was inspired by the story of Gianni Versace and what led to his death. I was reading Vulgar Favors by Maureen Orth, which inspired the series on FX about the story of the designer and the troubled Andrew Cunanan. Reading this book that documented the events and stories behind these two men and what occurred in both of their lives really intrigued me in a bizarre way. I got to reflecting about human psychology and classes I took in school about criminal minds, and the events that led up to Versace’s assassination. What I was taking in got me thinking on the visual spectrum about where the police and agents found Cunanans hideouts and locations. According to research on the subject, this whole story documented the most infamous manhunts of all time. This piece visually represents with the black circles the hideouts, the locations, and the stigma of that time in South Beach. There are hidden images within the piece as well. A tragic story indeed, but this piece also captures the vibrancy of South Beach that very much exists to this day. Other pieces of mine are featured, all inspired by the music I listen to when I’m in my studio. The rhythms, the chords- as I hear them it’s as though I’m transcended onto another plane and in my own world. I emote in color and layers of it, and I have work across the country in homes, offices, and restaurants from California to New York. Art is my passion. Feel free to contact me about art for your space. All of my pieces are originals and each have their own energy and story. 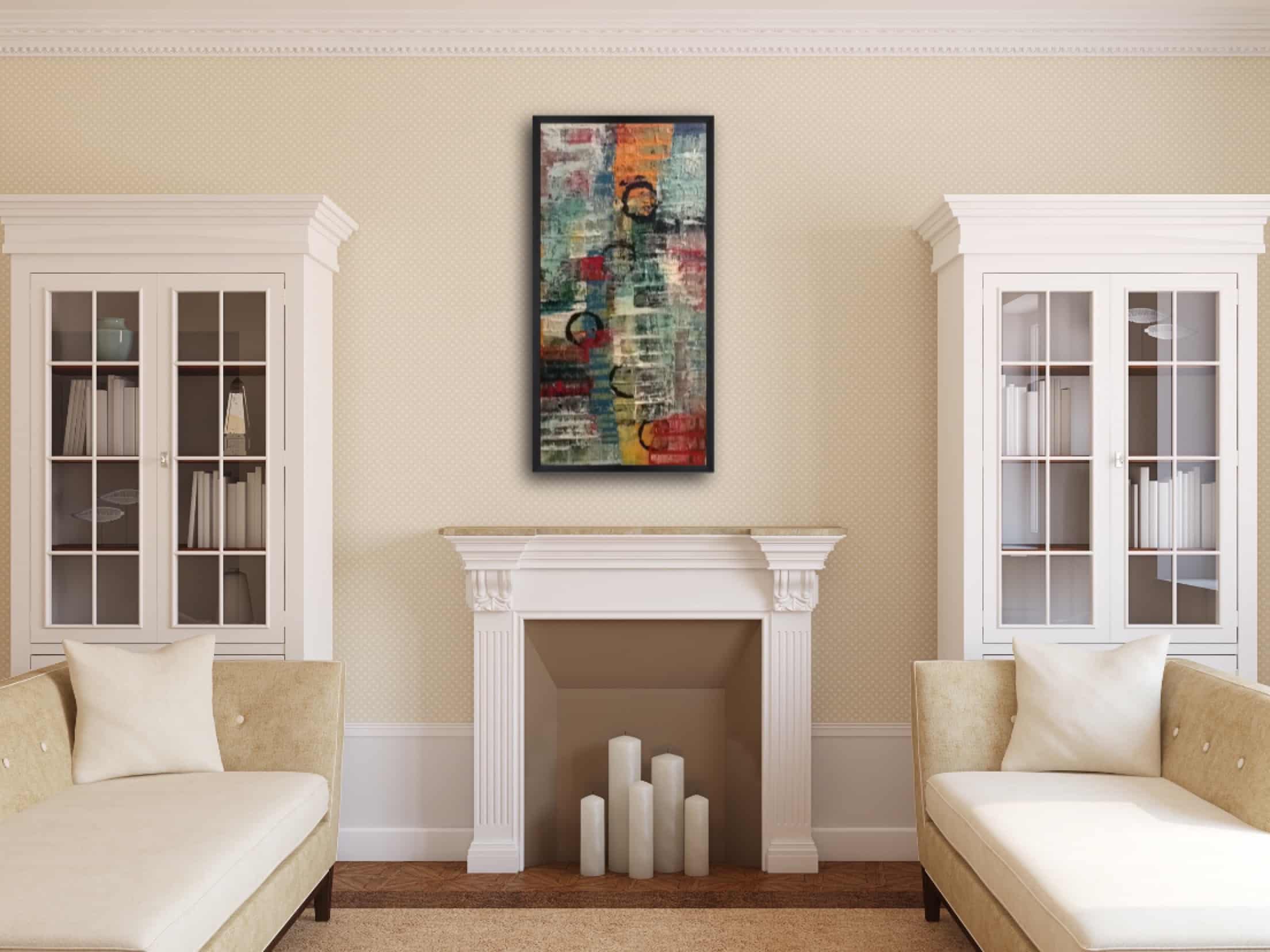 The plan was simply to visually create what I had read about pertaining to the story of Gianni Versace and Andrew Cunanan. I hadn’t a clue who that latter was, and after visiting Miami, seeing Versace’s former mansion, and enjoying the vibrancy of the city of Miami- more specifically South Beach- I had to paint what I was feeling from everything and just let it out. 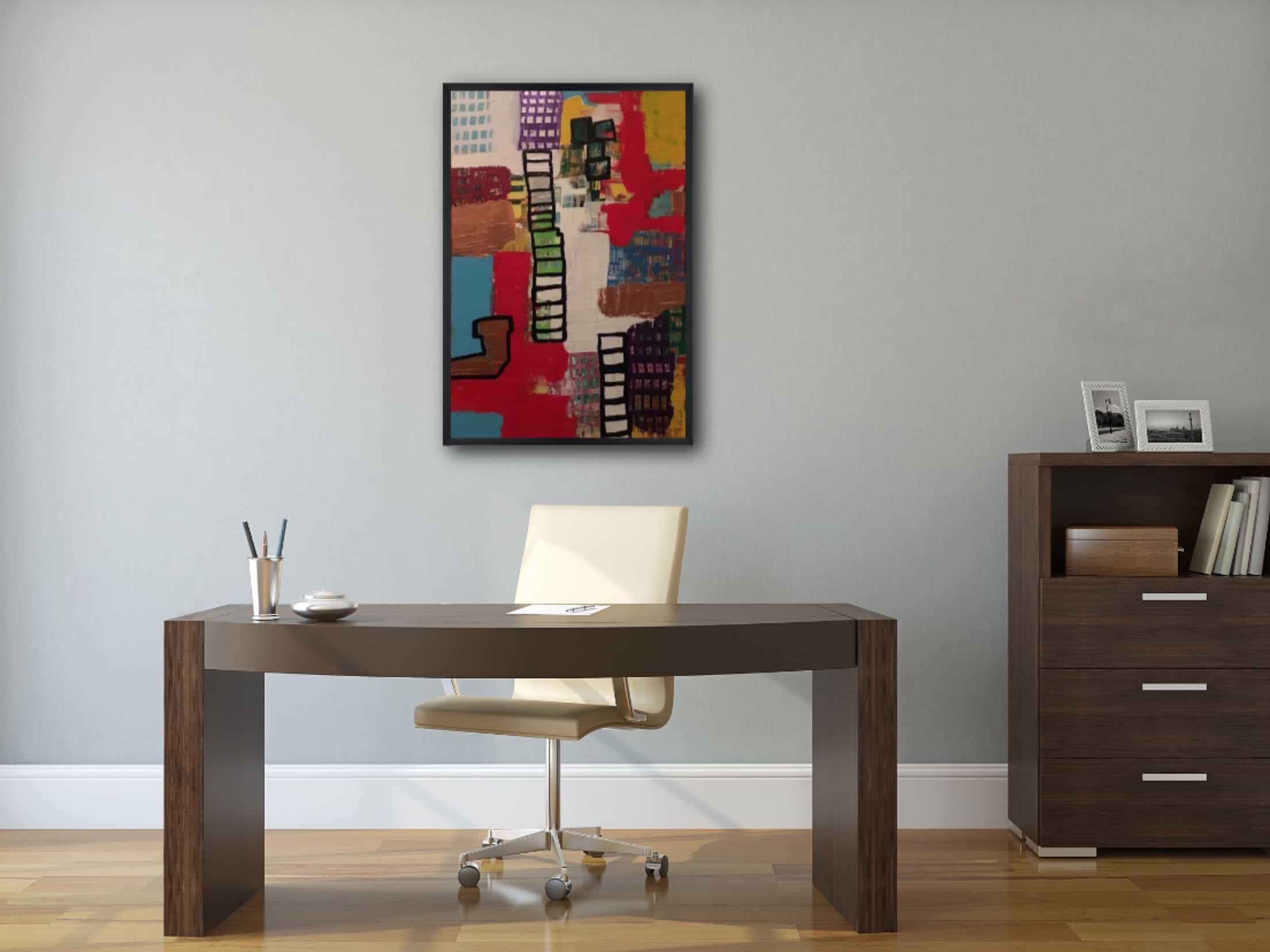 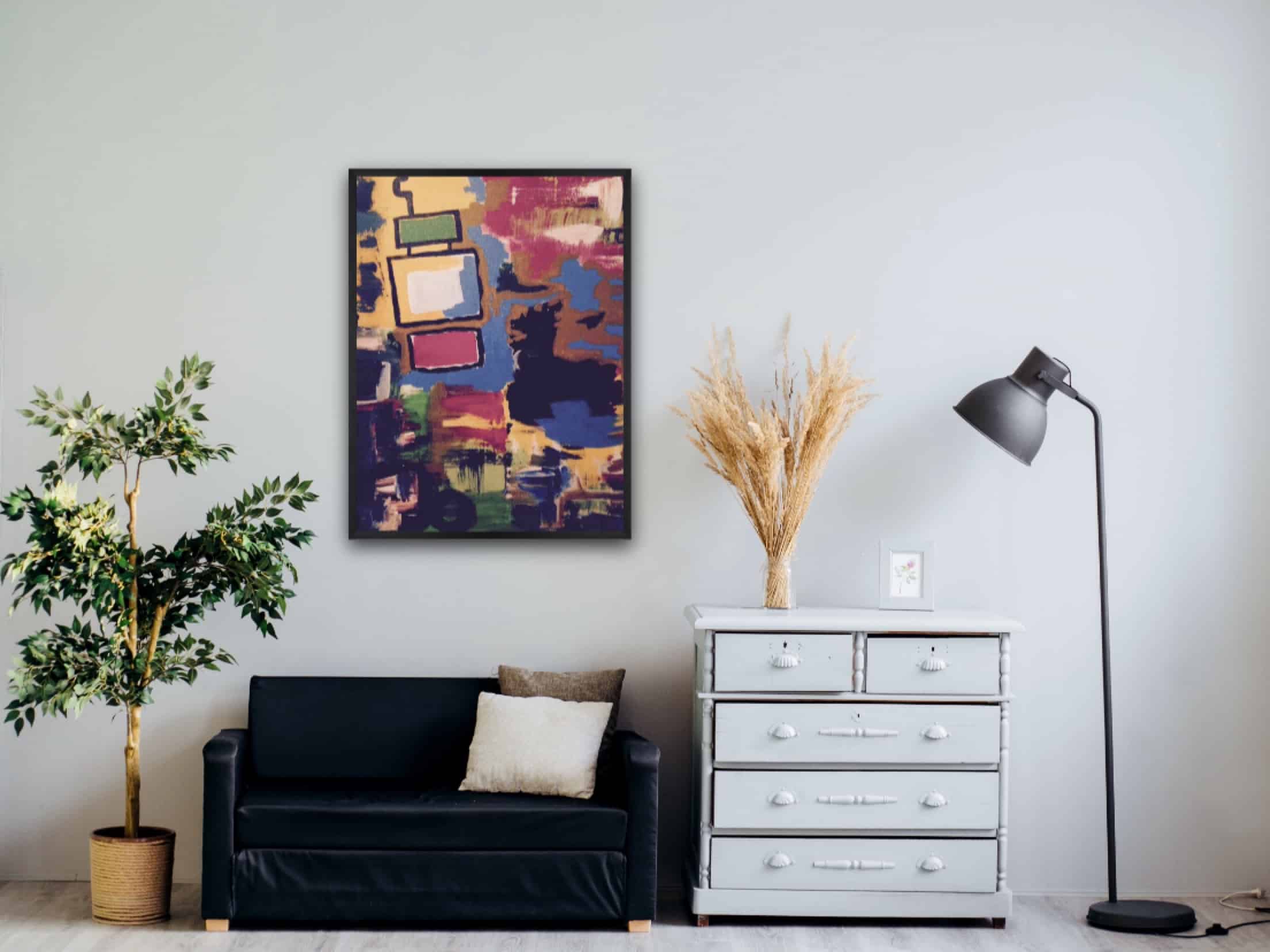 The inspiration came from the city- and definitely from reading Vulgar Favors by Maureen Orth. I paint with acrylics and decided to create the points of reference where Cunanan might have been and found. The circles are a representation of the location of Versace’s mansion as well as other locations where Cunanan was in south beach. 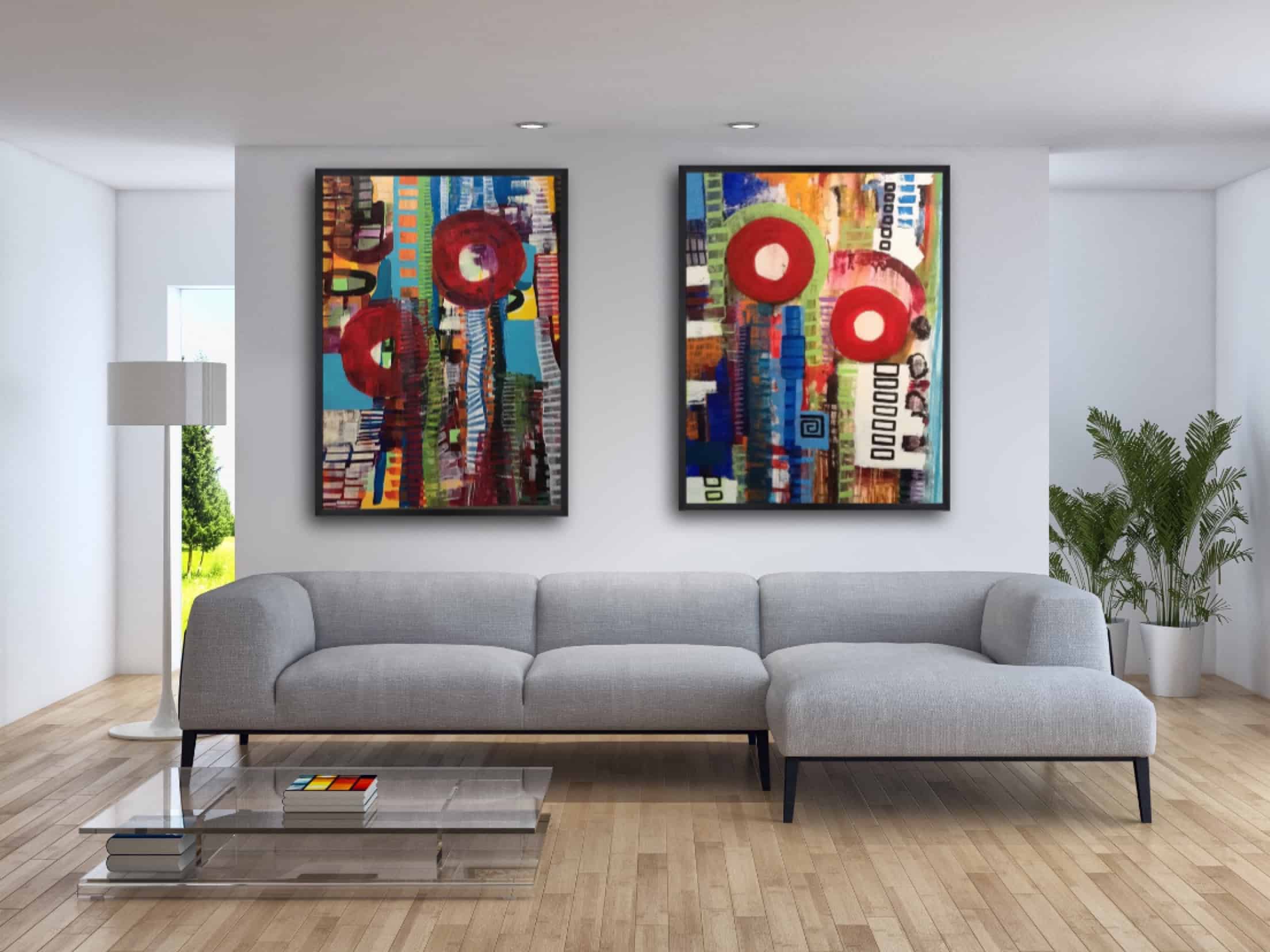 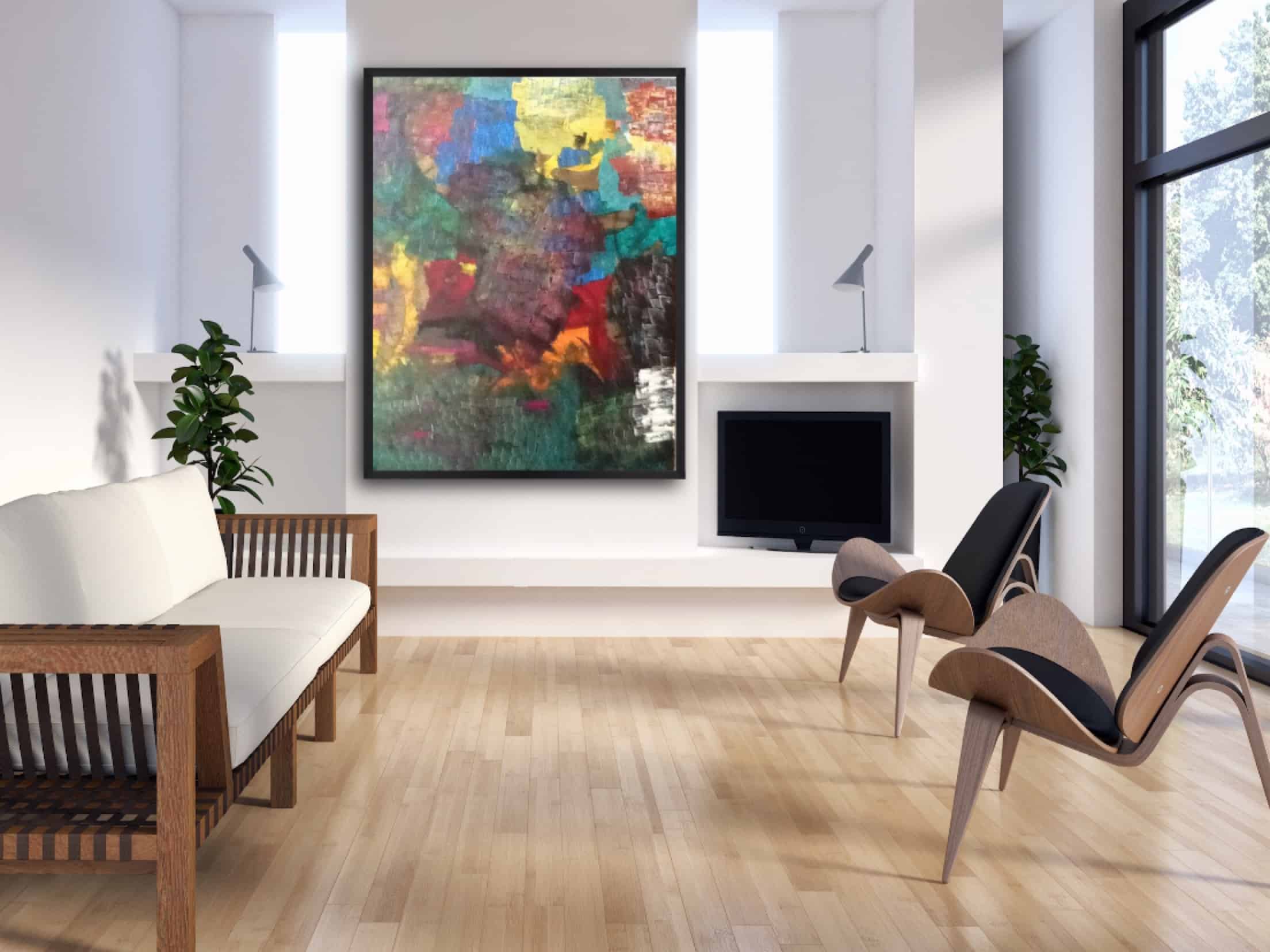 I’ve gotten a lot of good feedback about the color utilization and texture and have been asked about the circles and what they mean in the pieces. I learned a lot about a story of two people I knew nothing about until I read this book, and I was inspired and wanted to create something from it.

I have always utilized artistic expression as my way to connect with others and the world around me. I was fortunate to have had an amazing family who could afford me piano lessons, in which I turned around into being a poetic songwriter, and an unbelievable art teacher in elementary school who helped me understand the healing of art when he noticed my struggles with assimilation from my home country of Cape Town, South Africa into 1989 Lexington, Kentucky. I never studied art in school because my connection to creating is far too personal to have a professor shred to bits, and more than likely me with it in the process. As an adult, sharing my art is my passion, and in the last several years of my professional career, I’ve cultivated my style and understood the importance of art in the world. I’ve collaborated with several non profit organizations to raise funds for their causes by curating art shows. Art gives me a voice, and my mind communicates in color.